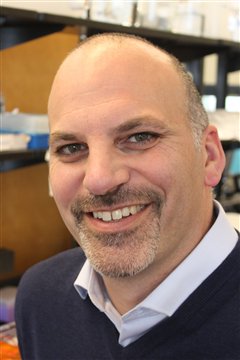 Bernardo Trigatti, or Dino, has been working at the Hamilton General with TaARI, since January 2010. He says as a child, he was fascinated by nature and constantly asking questions. This led to an interest in research. “I’ve always been interested in discovery and asking questions and finding answers,” he says.

With TaARI, Trigatti’s research has been focused on causes and prevention of atherosclerosis. Atherosclerosis, also known as the hardening of the arteries, is caused by a build-up of cholesterol in the blood vessels and can reduce blood flow to key organs such as the heart and brain.

This is not to say all cholesterol is bad, Trigatti says. “All cells need cholesterol to grow . . . but too much cholesterol can build up and causes problems.”  He is researching the interaction of cells in transferring cholesterol into and out of artery walls.

Cholesterol is made inside cells and then gets packaged into lipoproteins, which transport the cholesterol through the blood stream. If a person has high levels of a type of lipoprotein called LDL in their blood, cholesterol can build up in the artery walls.

This process occurs in everyone, but many people suffering from atherosclerosis have trouble moving cholesterol to the liver so it builds up, hardening in their arteries.

If they can map out this pathway, Trigatti says they could study patients to see if the chain of information is functioning properly. If not, it may be a way of predicting heart disease. “Or we can try to develop approaches to treat heart disease by trying to keep this pathway active,” says Trigatti.

This means they could develop a drug to trigger certain steps in the molecular pathways. For example, Trigatti says, if the first molecule in a patient’s “chain of information” isn’t functioning properly, they can side-step by going straight to the second step. “Knowing these molecular pathways will give us some insight into approaches that we could design for new therapies to deal with heart disease.”

The Trigatti lab is using mice to test their theories. The advantage of this, Trigatti says, is they are working from a previously developed method of turning off certain genes in mice. This is important for their work because it means they can trace which genes are encoding key components within the molecular pathways.

“I feel privileged to be working with a very talented group of young researchers in my lab,” Trigatti says. These include research technicians and postdoctoral researchers, several graduate students, and undergraduate students from McMaster University.

Trigatti and his group’s research is funded by grants from the Canadian Institutes of Health Research, and the Heart and Stroke Foundation of Ontario.