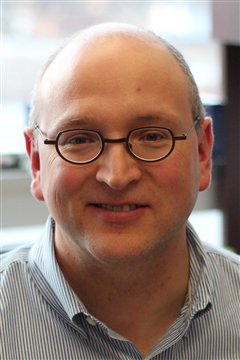 Associate Professor,  Division of Hematology and Thromboembolism, Department of Medicine

Dr. Peter Gross says he moved from Toronto to the Hamilton and TaARI in 2007 to focus his life on thrombosis.

Dr. Gross says he first became interested in thrombosis, or the formation of blood clots, when he by chance went into a platelet lab at the end of his third year of undergraduate studies. Since then he says he hasn’t found anything he likes more.

He did his masters in platelet studies and he says he continued to perform research during medical school.

“I just kept coming back to the fact that I wanted to do academic, basic science and medicine as well,” Dr. Gross says.

Splitting his work at TaARI between research and dealing with patients keeps him from getting bored, he jokes.

“It’s very different working with a mouse and a microscope and grad students and then dealing with patients; it’s a completely different world, but they’re related,” he says more seriously.

Dr. Gross joins these two worlds by taking the problems and questions he encounters in the clinic and bringing them into the lab to be researched and answered.

While many researchers focus on one particular question or issue, Dr. Gross says his lab studies a variety of things.

“Basically, it lets you use a microscope to make a video of thrombosis happening in a mouse,” Dr. Gross summarizes.

He says they make a blood clot happen in a mouse, and make a video of it happening. They can then label different components of the blood clot to figure out what purpose they serve, he explains.

Once they know more about the clotting process, he says they can better understand what is needed to make clotting drugs more effective.

Despite the variety of questions asked in his lab, Dr. Gross says they are largely based on the same theme:

“Can we find, by understanding biology better, ways to separate thrombosis [clotting] and bleeding?” he asks. “So in other words, prevent thrombosiswithout causing bleeding, or to fix bleeding without causing thrombosis.”

The first project Dr. Gross and his lab are working on is a class of cholesterol-lowering drugs called statins that have been shown to save lives in people with heart disease, but have other effects as well.

“We’ve made some findings that they [statins] actually stop platelets from working, kind of like Asprin would, but in a better way,” he says. “And they do it without causing bleeding, that we know of.”

From this, Dr. Gross says they’re trying to figure out exactly how statins inhibit platelets. He says they hope to then create a drug that is safer than current platelet medications which can lead to bleeding problems.

Dr. Gross says his lab is also examining microparticles, which are tiny cell fragments of the cell, containing active parts molecules like proteins . When patients have cancer, he says, the cancerous cells release these particles and can make an area more open to the invasion of cancer cells.

These microparticles can also promote clotting, which is a good thing if, for example, the patient has haemophilia and needs the assistance.

Dr. Gross says his lab asks, “Can we take these microparticles and use them to fix bleeding problems?”

Further related to thrombosis, he says they’re looking at ways to stabilize clots in the legs so they don’t break off and travel to the patient’s lungs.

To do this, Dr. Gross says they create a clot in a mouse’s leg vein and watch, using the microscope, how much breaks off and how different treatments affect the clot.

While performing research, Dr. Gross says they’re also trying to improve research methods. Using antibodies, it is possible to label a molecule you want to study under the microscope, he says. But Dr. Gross’s lab wants to create is a method of labeling an activity where it is taking place.

“It’s not labeling a thing; it’s labeling an activity,” he says.

For photos of the Gross Lab members, please follow the link at the bottom of the page.

2. Falati S, Gross PL, Merrill-Skoloff G, Furie BC, Furie, B: Real-time imaging of the assembly of platelets, tissue factor and fibrin during arterial formation in the mouse. Nature Med 8:1175-81, 2002